In late April, ULI convened a group of land use member experts in San Antonio for an Advisory Services panel supported by the 10-Minute Walk Campaign. The panelists, working with panel sponsor Hemisfair Park Area Redevelopment Corporation (HPARC) and supported by a charitable gift from Silver Ventures, provided recommendations on the final phase of master planning for the Eastern Zone of the Hemisfair site, a 19-acre (7.7 ha) downtown civic park.

Before making recommendations, panelists toured the site and the surrounding San Antonio area and interviewed more than 80 local stakeholders. The panel presented its recommendations at the Instituto Cultural de México, located in the center of the Hemisfair site and adjacent to the study site. Although specific to the site, the panelists’ recommendations serve as best-practice

“We’re going to build a case for you that leads to both the plan and the vision and method of execution, and ties it to San Antonio’s objectives regarding a great place,” said panel chair Alex Rose, a ULI trustee and senior vice president of development at Continental Develop Corp. of El Segundo, California. “The big takeaway should be that San Antonio is continuing to grow. That means people, that means households; that means Hemisfair has a capture opportunity and an opportunity to create a foundation for that great place.”

The Hemisfair site was initially developed to host HemisFair ’68, the 1968 World’s Fair, held in conjunction with the 250th anniversary of the city’s founding.

“There was a lot of preparation for the event that took place during that 1968 World’s Fair,” said panelist Marina Badoian-Kriticos, research scientist with the Houston Advanced Research Center in the Woodlands, Texas. “There was a lot accomplished, and the world took notice of the city. However grand, that vision did come at a cost—the physical connectivity and the urban neighborhood vitality that once stood on the site. What remains today is a virtually unconnected superblock with disparate uses and a landscape that was further obstructed with the construction of the convention center and the imposition of I-37.”

The panel sought to help HPARC fulfill its vision of creating and sustaining one of the world’s great public spaces. 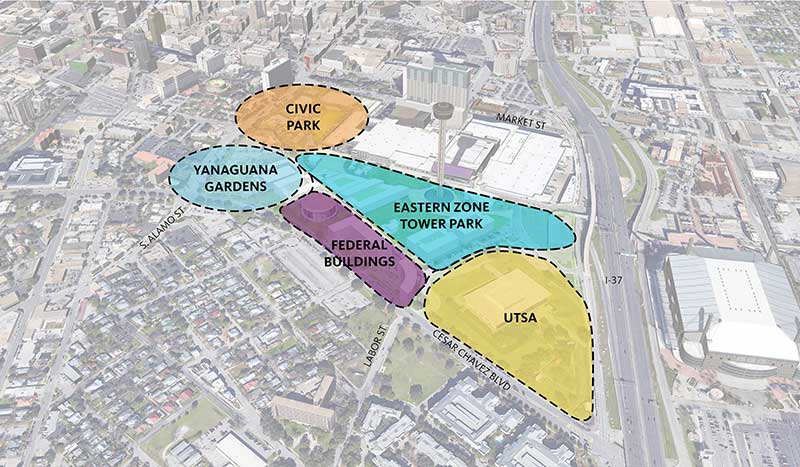 A diagram of the site created in relation to other assets in the area by panelists. (Ricki Nishimura/ULI)

Hemisfair’s Eastern Zone encompasses the center and southeast quadrant of the park and includes a number of historic structures. It is bordered by the Henry B. Gonzalez Convention Center to the north, the University of Texas at San Antonio’s Institute of Texan Cultures and Interstate 37 to the east, and East César Chavez Boulevard to the south.

Adjacent to the study area is the phase one project Yanaguana Garden, an immensely popular four-acre (1.6 ha) dining and children’s play area completed through Hemisfair’s first public/private mixed-use development. The second phase, known as Civic Park, is a nine-acre (3.6 ha) green space located just north of the phase one area and scheduled to begin construction this summer. ULI panelists tour the site at the foot of the Tower of the Americas.

The panel recommended creation of a series of walkable public green spaces framed by residential projects and locally owned retail space to transform the Eastern Zone into an urban district reconnected with the residential neighborhoods to the south and the tourist and commercial district to the north. The panel’s approach promotes connectivity to the surrounding neighborhoods through “complete streets” improvements, multiple on-site residential housing units (including affordable and senior housing), and holistic integration with other phased development in the overall site.

To support inclusive development, generate funds for capital improvements, and create a space that contributes to a vibrant downtown, the panel recommended a strategy that defines public and more private spaces through the rhythm of new corridors and buildings that help define a vibrant urban space.

“Connectivity plays a critical role in how the site begins to connect with its contents,” said Riki Nishimura, director of urban strategies for Gensler in San Francisco. “The panel recommends a vision framework that is underpinned by the concept of connectivity from a social, equitable, resilient, and physical perspective.”

Prominent structures in the Eastern Zone include a federal courthouse, a government services training facility, and a federal office building. The panel recommended removing the training facility and removing the interior and some walls of the adjacent circular federal courthouse to create a covered, public amphitheater or theater-in-the-round with an adjacent park. This could position the area as a gateway into the Eastern Zone for residents from neighborhoods to the south. The seven-story federal office building and adjacent parking lot should be converted to provide affordable and senior housing.

The eastern edge of the study site is anchored by Tower Park, a multilevel water feature surrounding the base of the Tower of the Americas. The panel recommended removing the water feature to improve the open space.

The panel put a premium on creating public and park spaces to craft an inviting corridor that would result in a revitalized urban neighborhood. It highlighted the grotto entrance to the park from the Riverwalk, one of the city’s most popular attractions. It also recommended creating access from the Convention Center to make the Hemisfair site more accessible and inviting to people attending conventions and improving access from across I-37, east of the zone.

The panel also said redevelopment of César Chavez Boulevard, on the zone’s southern edge, is vital for improving connectivity to neighborhoods south of the site. These recommendations were in keeping with the 10-Minute Walk Campaign, a national movement to ensure that residents of urban neighborhoods across the country have access to a high-quality park with a 10-minute walk of their homes.

“We heard from a number of people when we did the interviews that this is the most important piece of real estate in the city,” said Allen Folks, principal and director of design and planning at Ascent in Sacramento, California. “At the end of the day it really is about this park piece and how it functions and what we get out of it. The parks and the open spaces lead, and the P3 [public/private partnership] sites follow. It’s not the other way around. This is why it’s so important to get these public spaces in the right location.”

The panel’s presentation included guidance for implementation measures, including recommendations for structuring complex public/private partnerships, maximizing available public/public impact, and using financial tools that can support a creative mix of funds to make the Eastern Zone a success.

Regarding the type and scope of commercial development that could be supported in the Eastern Zone, the panel’s development strategy sees potential for 775 multifamily rental housing units, 200 affordable units in the converted government office building, 36 townhouses, 11,000 square feet (1,000 sq m) of neighborhood retail space and a 45,000-square-foot (4,200 sq m) attraction similar to the Exploratorium in San Francisco.

“While it is a big task ahead, this is not the first community that has tackled these types of challenges and opportunities,” Rose said. “The panel believes that this is within your capability and grasp. The panel believes that it will return to San Antonio in the near future to enjoy your successful creation of one of the world’s great public spaces.”

A ULI Advisory Services Panel was recently in San Antonio to study the Hemisfair site. View their recommendations here.